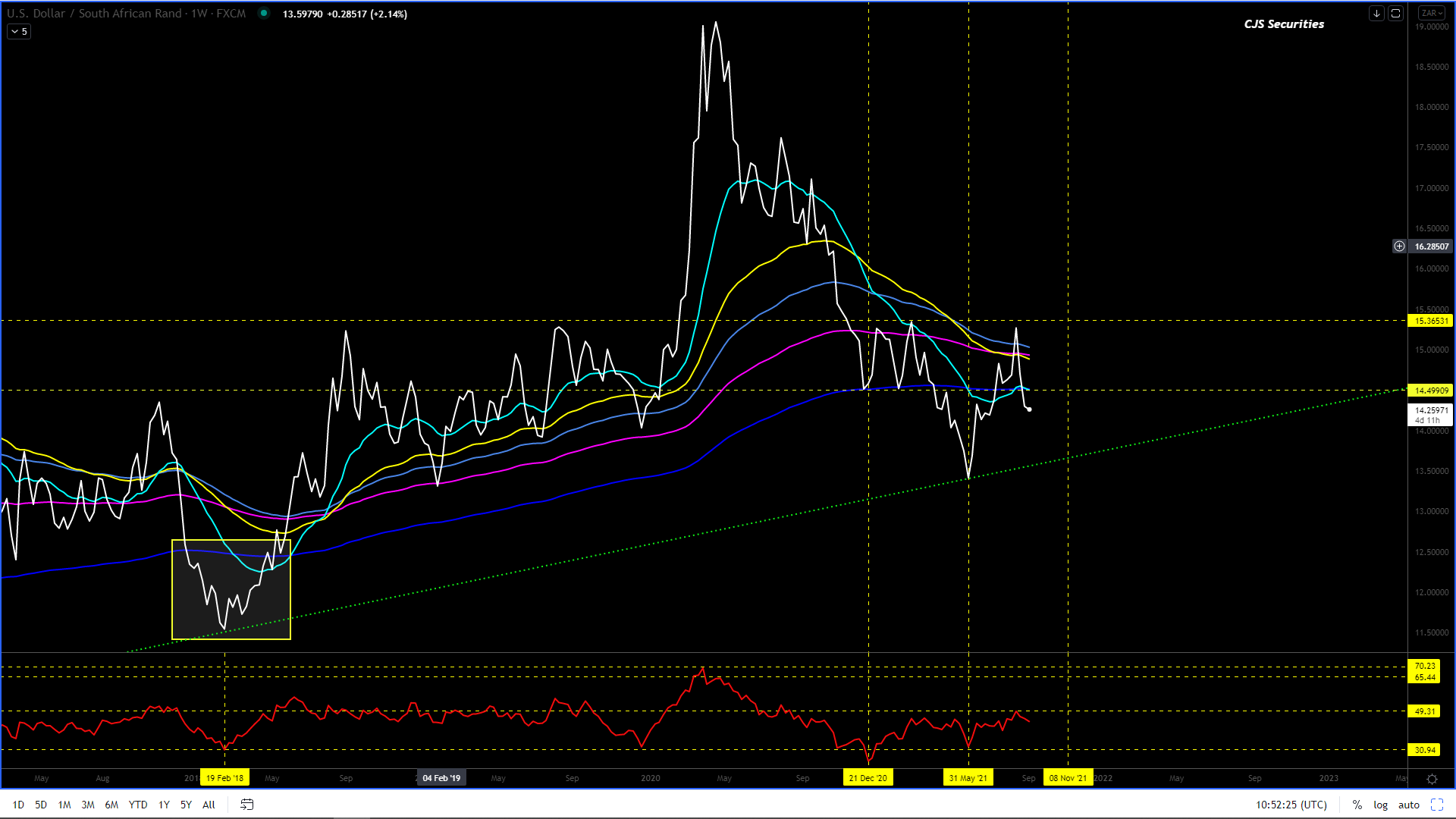 With the double tops over R15.30 weighing heavy on this chart, we have now also had an extremely weak weekly close.

This chart now has some serious structural issues and although a USD bear market has not yet confirmed, I am struggling to see the chart much higher as my Euro / Dollar view needs a leg up to minimum $1.24.

I still maintain it is the time for “gorilla warfare” trading, and I would not hold onto a position for more than R0.30 as the ranges will be huge.

The major local banks say that liquidity has been rubbish for over 2 months and even the CEO of the JSE came out on record that what keeps her awake at night was the amount of foreigners pull their capital out of SAF.

This recipe leads me to believe that the trend is not your mate until further notice.

As three friends of mine so eloquently pointed out last week, that they we were waiting for my big picture call over R20.00 to play out.

One said I need to rename the report to tech madness while the other said “sorry mate, just sleep with one goat”, but alas as a very learned gent once told me “always know where you are wrong” and based on the techs before me I have no trust in the market until we see some structural changes and in the weeks ahead, we may even consider owning the ZAR.

Right now the exporters seem to have all the major flow. 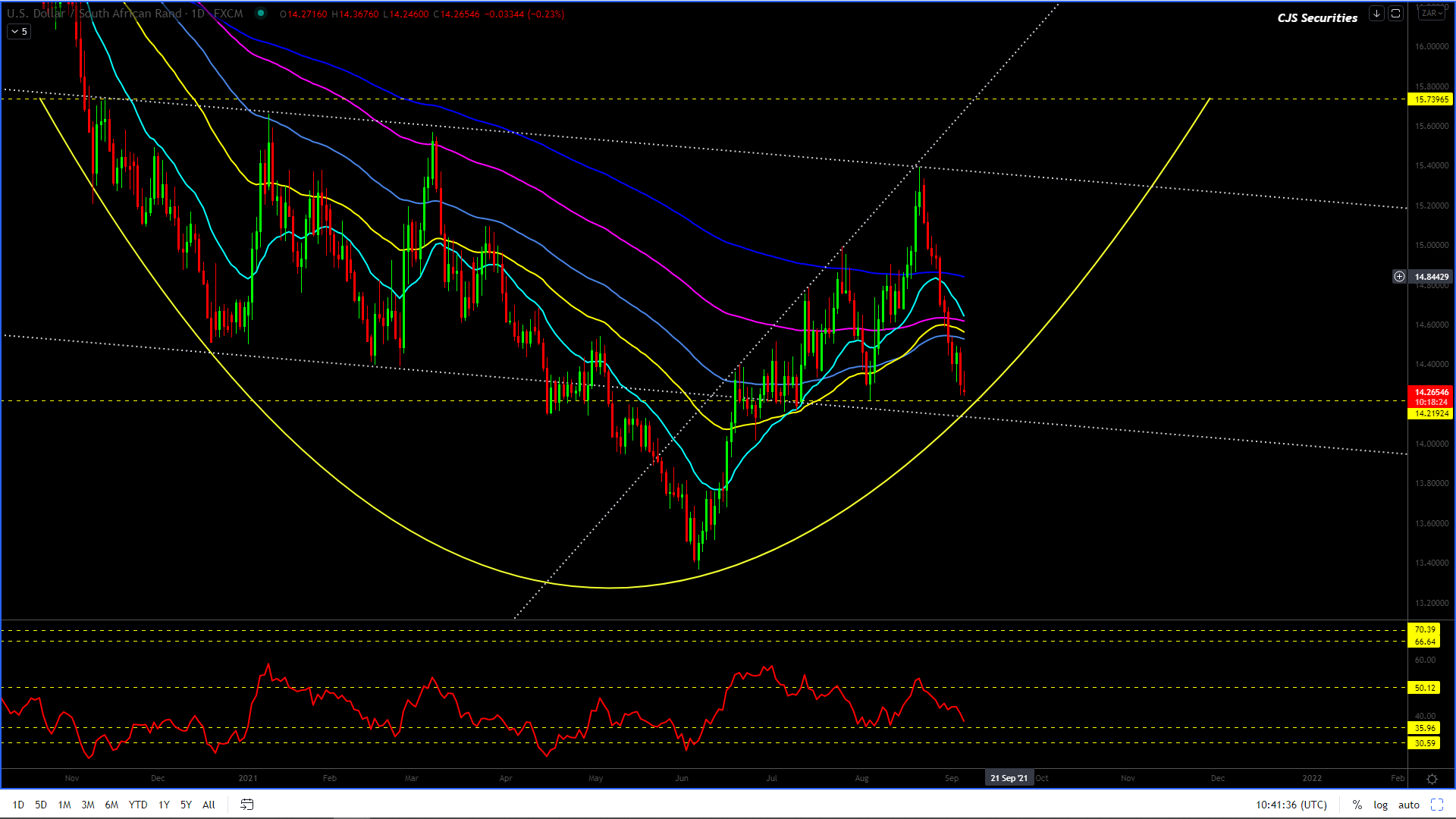 The below scenarios seem to have both failed although scenario #2 can still play out but is becoming highly unlikely.

In the ST the R14.20 really needs to hold, but there is significant support down to R14.10, however the chart is not yet oversold and anything can happen.

The path of least resistance is clearly lower as the market struggles to move higher by R0.10 but can fall R0.15 in the blink of an eye.

The original “this chart will blowout” view is still on the cards as long as R14.50 holds.

The current formation is an irregular flat bear correction that trades back to the R14.20’s, then trades up hard and fast to print between R15.70 – R15.86 to complete the correction while getting everyone and their dog long USD, only to collapse and come down to test the yearly lows and possibly print as low as R11.50.

Both scenarios will have one wondering because after the ferocity of last week’s fall, there is very little confidence in this chart.

As with the weekly chart, I would not hold any position now for more than R0.30.

Please don’t wipe yourself out as there will still be plenty of opportunities to come before year-end. There is very little to say about this chart, other than it could potentially be making an ending diagonal, which could well precipitate the pullback to R14.60.

There is decent support from R14.20 & R14.10 but as with other time frames the chart is not yet oversold.

I can see no trade here worth taking and would strongly advise staying out until further notice. 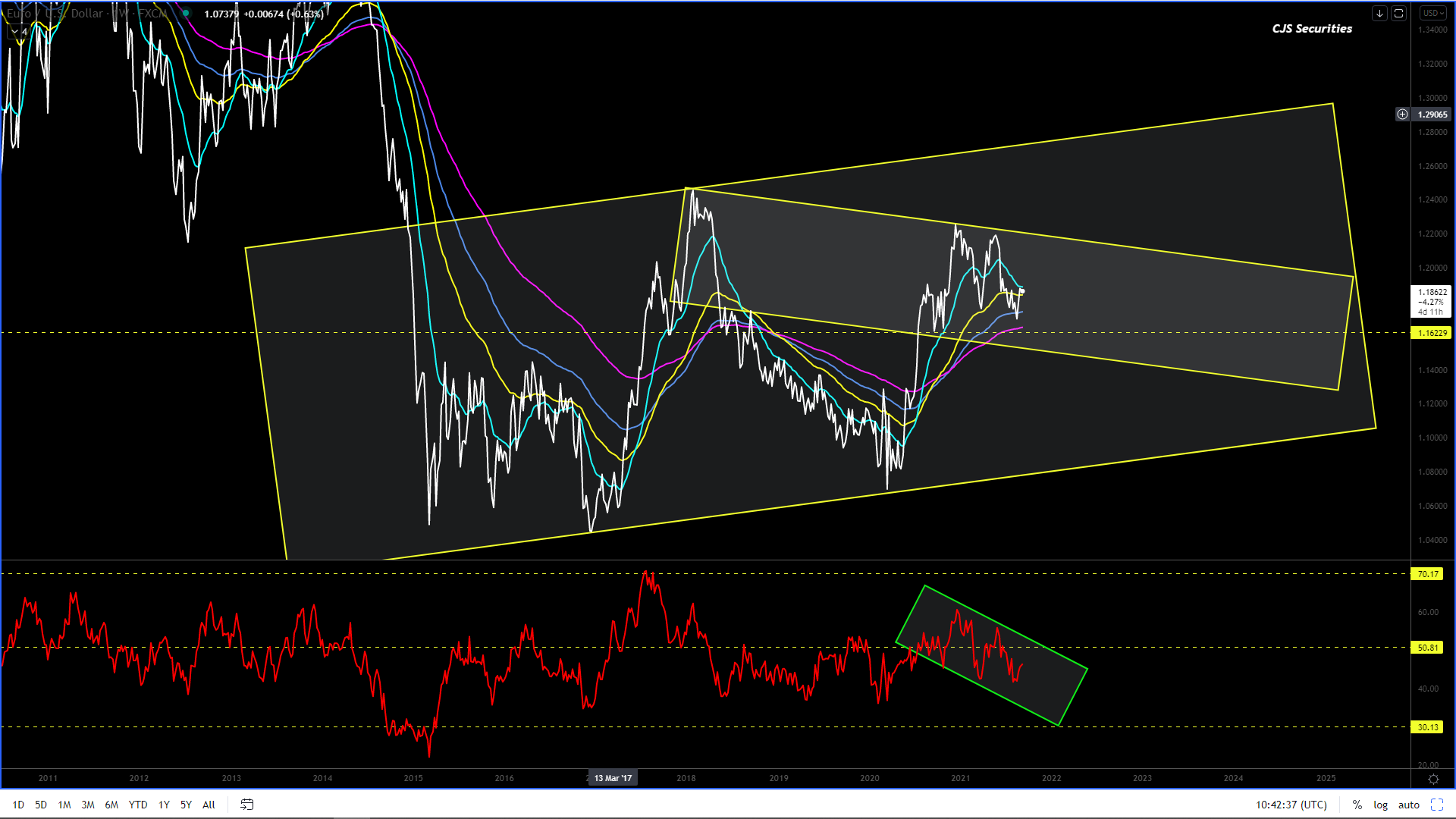 The below commentary from last week seems to holding up nicely.

Not only has the $1.16 level held like the Rock of Gibraltar, it now seems almost a “fait accompli” that the correction will see its last leg up north of $1.24 in the coming months.

Once the above move is over, the USD will strengthen significantly, but first, there is much cash to be made playing the Euro from the long side.

The general view is now long the EURO until we have a daily close under $1.16! 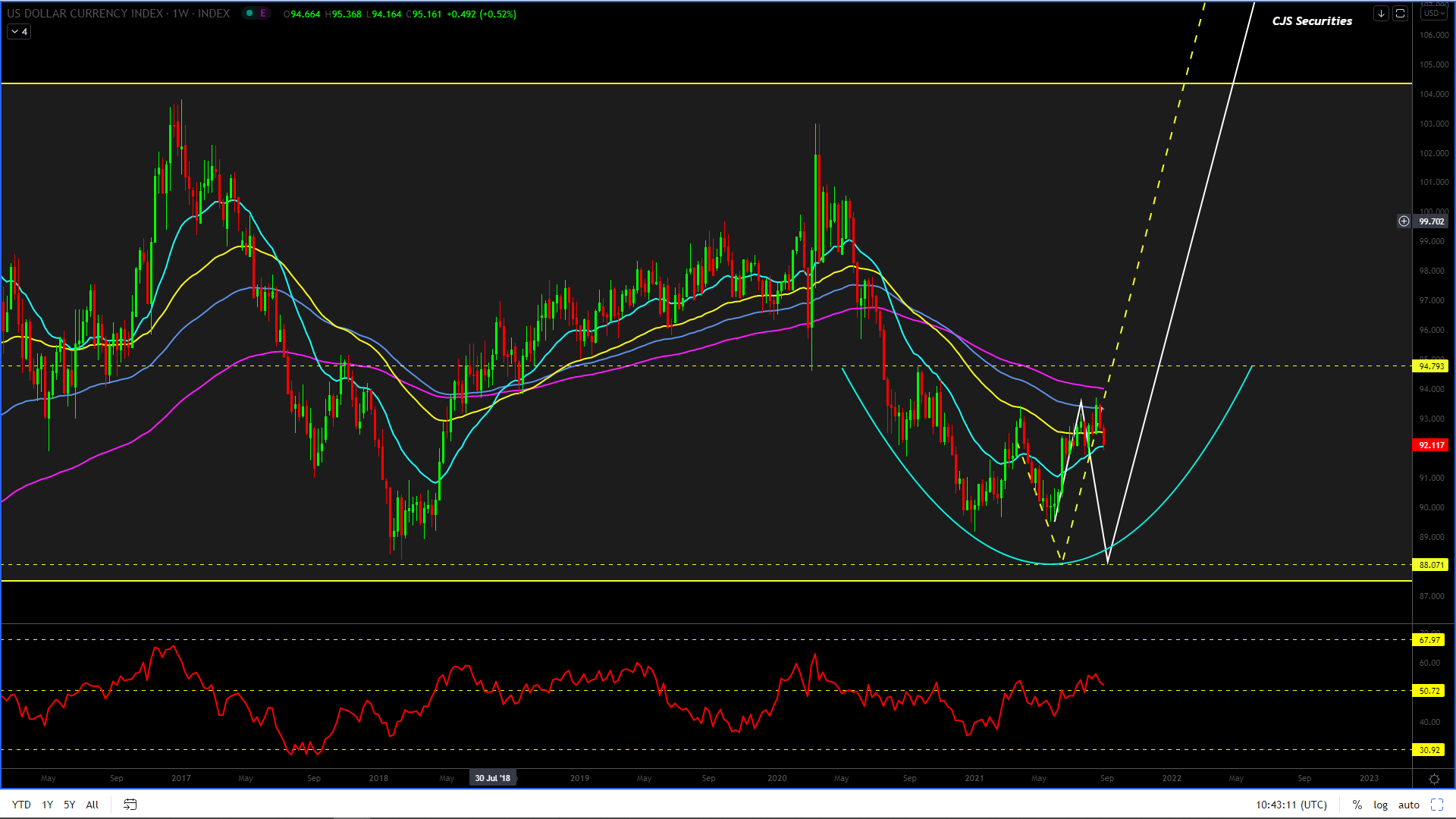 #No Change in commentary

The DXY now appears to be headed lower before it goes higher in line with the white line road map and off the back of the Euro. 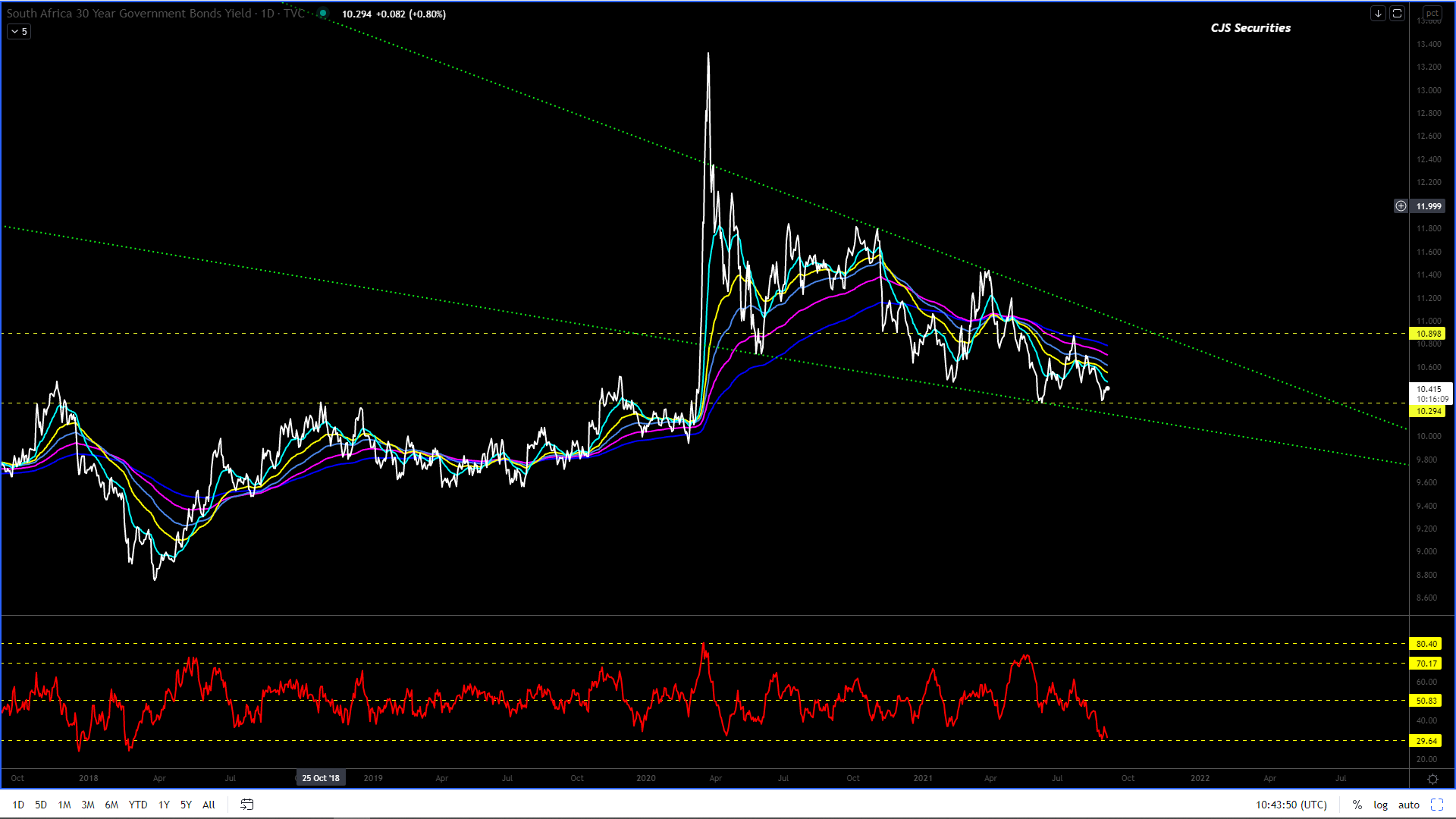 This 10.30% level is sticky as hell, but if it does not hold, then there will still be a decent amount of downside in this chart over the next 12 months.

The ending diagonal formation will be off the table under 10.20%, and right now, I must confess that 9.22% looks very much on the charts.

Having said all of the above, don’t panic!

The chart is now oversold but can continue lower before kicking, but overall, I would expect a kickback to 10.90% before printing the 9.22%, so you should have time, at least I hope so! – ‘I truly hope this ages well.’ 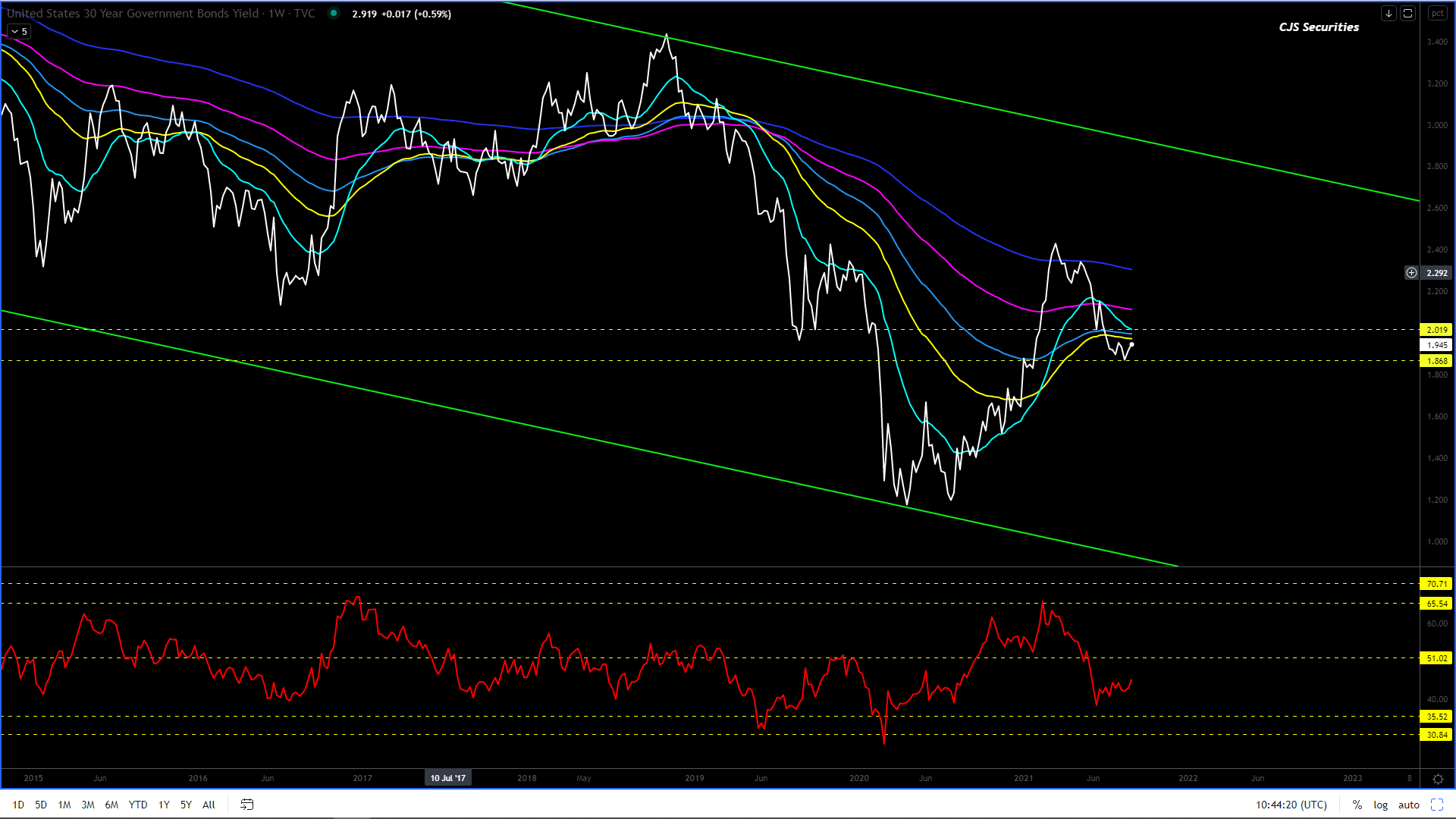 #No Change in commentary.

Please note that only a weekly close of over 3.50% will confirm that the trend has been broken.

As for now the downtrend is still intact!